The stylish Haneel Tri-Vision viewers and cameras were produced in Los Angles, USA around 1946. The viewer was made from plastic and was available in marbled brown, as show below, black and some examples have been seen in red (under the brand name 'Keys'). The viewer eyepieces turn in and out to facilitate focusing. The camera was fixed focus and made from plastic, with some examples having an aluminium back, (the one below is plastic), in many cases the back was held in place by two clip springs, but there are later models that have aluminium alloy backs that are hinged at the bottom with a sliding latch in the middle of the top. The plastic back plates can warp and allow the entrance of light into the camera, which would, of course, spoil the film.  The camera used Eastman 828 roll film and took 12 exposures. When new it sold for $28.85, whilst the viewer cost $7.50 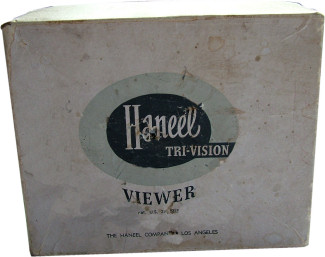 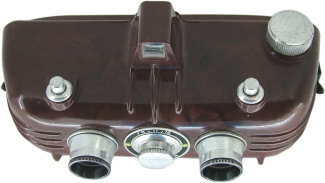 The slides consisted of a single piece clear plastic holder with a slit on each corner into which each photograph was inserted, just like in some photo albums. This made for easy cutting up of film and insertion by the home user. 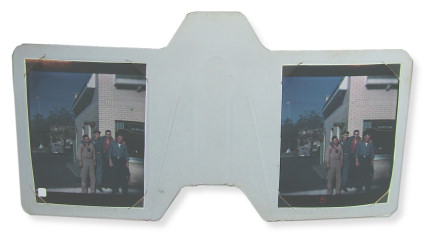