View-Master reels last well and are fairly hardy, especially considering some are over 60 years old. There are some common faults to look out for, the most common, and the curse of View-Master collectors, is know as 'bubbling'. This is where the two halves of the reel have swollen internally, creating blips on the surface. This is caused by poor storage in damp conditions.

After a reel has been viewed many times it can develop a viewing ring, this is caused because the tag on the internal advance mechanism inside the viewer is metal (on early viewers) and this rubs on the reel as it returns to it's 'rest' position. If you have reels you like to view often, consider using a newer viewer, such as the Model L, which has a plastic advance plate.

Damage can also be sustained by using a worn or malfunctioning viewer. This can lead to slide windows getting snagged and creased in the reel.

Older Model A and Model B clamshell type viewers had a spigot on which the centre of the reel rotated. If the reel was put on there carelessly, this could damage the centre hole and possibly tear the reel.

Dust can accumulate on the images and this can generally be removed using a photographic puffer brush or by very lightly using a clean, dry microfibre cloth, but this must be done very gently.

Mould can grow on images and this is very difficult to remove as it damages the photographic emulsion. If this has happened it is unlikely that it can be repaired, although you can purchase photographic emulsion cleaner if you do wish to try. The mould may be caused by contamination, such as grease from finger marks or spittle and then not storing the reels in a dry, protective environment

Another thing that can go wrong with reels is that the glue holding the two halves of the reel can fail. This results in picture falling out and ultimately the halves separating completely. Repair of these reels is very difficult and realigning the images accurately is almost impossible 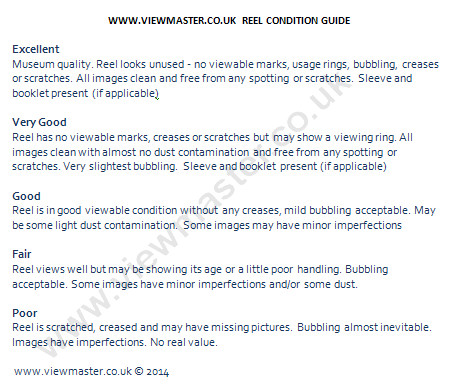