The TRUE-VIEW stereoscope shown below was manufactured by Signalling Equipment Ltd,  Merit House, Potters Bar, Middlesex, England, some time in the early 1950's when it sold for 17s/6d (87.5p), this included two films strips. SEL was a subsidiary of J & L Randall Ltd, a toy and games maker that had many products sold under the Merit brand name. SEL were also well known for making Morse Code keys.

Little is know of the SEL company and the viewer is one of the stereoscopic world's mysteries.

It is almost identical in every way to the similarly named TRU-VUE viewer from 1947, which was made in Illinois, USA. No records appear to exist to prove if there was any link between the two companies. The True-View viewer may have been a blatant attempt to copy a successful product from another country or it may have been the subject of a licensing agreement. An alternative theory is that when Sawyers purchased TRU-VUE they ceased production of the product in the USA, as it was a rival to their own products and the moulds were somehow obtained by SEL. This seems quite likely and would explain the almost exact nature of the copy.

In all, only 25 to 30 stereo film strips were every produced for the TRUE-VIEW viewer, all of the subjects were based within the United Kingdom. Even the format of the images, title slide and boxes were copied, as can be seen in the photographs below. One difference in the film used is that the English film strips were black and white, whereas the USA films were more commonly sepia.

Was there a marketing agreement between the two companies? or was it simply a case of plagiarism?  We may never know. Whatever the truth, the TRUE-VIEW has long since disappeared into history, along with SEL company.

Interestingly this is not the only viewer that has carried the name TRUE-VIEW. In the late 1950's there was an inferior quality clone made in Hong Kong, whilst of a similar design, it was designed to show cards, rather than film strips. It can be seen here

The two boxes are incredibly similar, even down to the slogan," Pictures with Depth"

Words are written on the inside of both box lids

The film boxes are very similar, even sharing the same striping pattern. 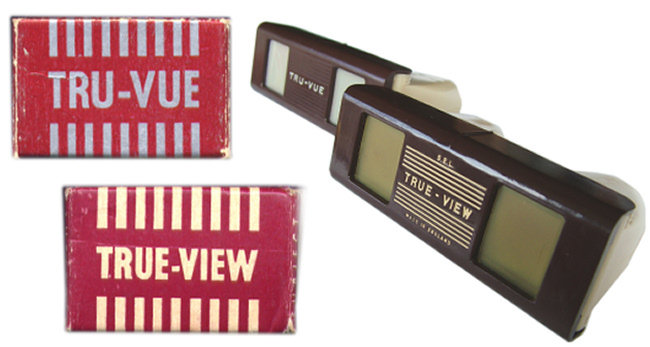 A title slide from each manufacturer, both very 'art deco' in style 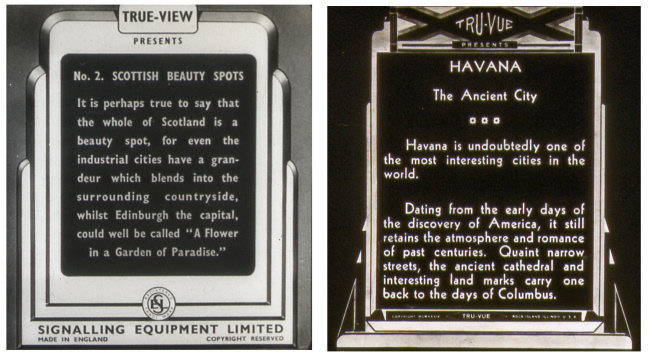 Two frames taken from the True-View film No. 1 London Scenes 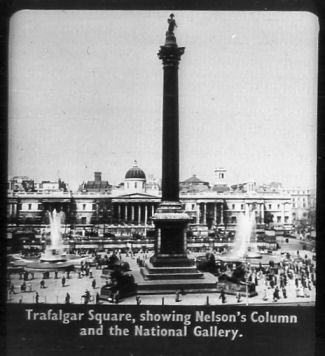